I created a Twitter-bot which monitors multiple paste sites for different types of content (account/database dumps, network device configuration files, etc.). You can find it on Twitter and on Github.

Paste-sites such as Pastebin, Pastie, Slexy, and many others offer users (often anonymously) the ability to upload raw text of their choice. This is helpful in many scenarios, such as sending a crash report to someone or pasting temporary code. However, in addition to some people not being careful with what they upload (leaving passwords and other sensitive data in the text), attackers have been starting to use these sites to share post-compromise data, including user account data, database dumps, URLs of compromised sites, and more.

Since there are so many users uploading text to these sites, it's often difficult to find these interesting files manually. While techniques such as Google Alerts can be applied, the results are often a day or two old and are sometimes deleted. This prompted me to create a tool which monitors these sites in "real-time" (less than a minute of delay for the slowest sites) for specific expressions, and then automatically rank, aggregate, and post these results to Twitter for further analysis. I call this tool DumpMon.

There are a couple of similar tools available which do essentially the same thing as dumpmon - with just a few key differences:


My goal with dumpmon is to create the "next step" of paste site monitoring with the following key features:

In the future, I would like to look into implementing the following features:

With those features outlined - let me quickly show you how I built the bot. Don't care? Just go straight to the bot here.

Here is the general architecture of the bot that's currently running: 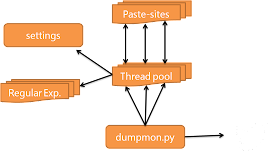 As you can see, each site runs from its own separate thread which monitors for new pastes, downloads each one and matches it against a series of regular expressions. Then, if it finds a match, it will build and post a tweet that looks like the following:

If hashes are found, it will also include the number of hashes as well as the ratio of emails to hashes. The "Keywords" attribute seen gives an approximate ratio of "positive keywords" found out of a given list, such as "Target: ", "available dbs", "member_id","hacked by", "database: ", etc.), subtracting value for each regex matched from the blacklist. Just another metric to help determine if a paste is "interesting." It should also be noted that the emails are found are unique.

Don't Bite the Hand that Feeds

It's commonly that the most time-expensive part of web scraping is actually fetching the content. While I could go about speeding up this process by completely using an event-driven framework such as Gevent, Twisted, or others, I wanted to do my best to my best to respect the sites hosting the content. Also, I didn't want the tool to get temporarily blocked... For a third time (my bad, Pastebin). With this being the case, my bot uses the following algorithm to only get new pastes using polite time constraints.


If you can think of any other paste sites you want added, let me know!